No matter how much more I seem to be using Facebook these days, I still have a soft spot for LiveJournal. But, in lieu of actual content, here is a photograph of a cutie. And me. 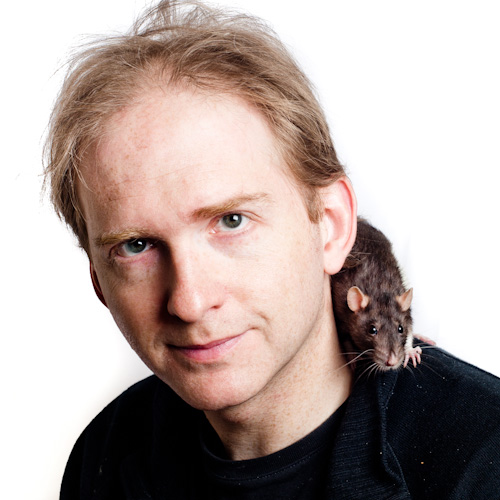 I like cycling. I prefer it to running, mind you - there's not much I don't prefer to running. However, moving on...

Over the last few months I've worked out a nice circular route in a local park. Those who follow my runkeeper will have seen occasional comments on the excitement caused by overenthusiastic canines and (perhaps worse?) British Military Fitness groups. These incidents haven't been helped by the cycle lane (part of the National Cycle Network route) through the park being rather dilapidated. In fact, for most of it if you didn't know it was a cycle lane you'd just wonder why there were occasional patches of white paint on the tarmac.

Good news though, some weeks ago the council repainted part of it. Restoring at least, ooh, 1km of lane. However, alongside the bright new cycles was a new addition - the number 5 in a circle. Now, this could be a reference to the cycle route, but I thought I'd better check with the council in case it was supposed to be a speed limit - but surely that would be ridiculous...
( Collapse )

Forget all the problems with education, rubbish, adult social care and other council spending... I demand answers...

In response to some of the discussions following Odyssey, which wasn't my favourite event ever but I'm getting over that now.

My name is Simon, and I am a nerd.

When I was at school I was overly intellectual - I wore glasses, I did well in exams and I hated sport. I remember vividly enjoying cricket because I could sit and read a book in the outfield, and when playing rugby was never quite fast enough to catch the person I was chasing and have to tackle them into the mud.

Formative experiences like these stay with you for years, so when designing Odyssey one of the early decisions was to look, wherever possible, for areas of the game where the 'fat kid' (as I referred to myself from those memories) wasn't left out. The most obvious examples of this are the arena and quests. In both these cases more champions are useful - it's not about choosing between one champion or another, or picking the best team - everyone gets a fight or a quest so the more 'fat kids' you involve the better it is for your nation.

This means that inclusion is built in from the foundations. It's about producing a game where people are encouraged to bring their friends and make them feel welcome, where the social side of the game sits alongside combat, puzzles, gods and politics.

Inclusion means characters and players. Character inclusion is more straightforward - they are created to serve a purpose and the choices in character creation are clear signals to the game organisers and other players where the players would like to spend their time. Inclusion of players can be more complicated. Superficially it is simple - events are public access and as such anyone can attend; but my problems start when one player's behaviour makes another feel excluded. This might be because they are fat or thin, bald or hirsute, straight or gay, male or female, tall or short - all manner of reasons. But whatever the issue about the player that can be mocked - and whether it is meant in jest or all seriousness, this kind of behaviour is unacceptable in our game.

There are plenty of ways to insult peoples characters rather than their players; to enjoy roleplaying without it being offensive roleplaying; to keep it fun.

We tried to build a game where everyone who wanted to be in could be, whether they were the lead batsman or the outfield bookworm, so behaviour that makes any player feel otherwise is not welcome.

I Write Like by Mémoires, Mac journal software. Analyze your writing!

On the ask again... anyone know of any organisation - ideally public sector and not too far from education/skills - who might have cheap office space for about 1/2 dozen people?

The interesting aside is it will be in London, most of the time.

Anyone got any smart ideas as to finding somewhere to live/a room for a couple of nights a week/...

... is not getting up early, spending £70 on travel, in order to resit a couple of crappy aptitude tests you did for the same organisation a couple of years ago - but they can't find evidence of the results.

Don't Panic! This is not another emo-introverted post. I've put that behind me for a bit at least.

I was looking at my LJ interests list and wondered how much it actually reflects me as a person. Of course it was never meant to be scientfic and equally was always designed to be public - both of which together destroy any real value.

However it did prompt me to look at the authors I like, the music I listen to and the movies I watch. What better way to work this out than looking at my online data trail. Play.com has just reminded me of all the DVDs I've bought in the last few years and Amazon has ten years of my online shopping there for me to see.

What I did notice were some wonderful trends and reminders of gifts - the odd book or two carefully chosen and posted to a 'special person' or bought for a birthday. It's like a little capitalist blog celebration.

Now, if I'd I'd written down all the films I've enjoyed at the cinema this year. Hmmm. A lot of them are, unfortunately, recorded in someone elses blog I can no longer read. Note to self - keep your own data in future if you think it might be interesting.

I have finished my exams. I am currently eating too many bananas and drinking too much coffee.

I know that I am drinking too much coffee because of two things I did in my exam this morning.

The first was to say 'Economists who believe in the accuracy of models should give up now and teach high school physics or write Science Fiction. For one of the few examples of models working read Isaac Asimov's Foundation books."

The second was to explain strange attractors in complex market systems using a line drawing of two houses separated by a hill with a car on it.

Either it'll be marked by a man with a sense of humour. Or not.

Now 4 days off before London.

Anyone still reading this shit?

Oh, and having lost my N95 I am now debating between an iPhone and an E75. The N97 has been written off as too much. If only O2's tethering plan wasn't absolutely dreadful the decision would be easy. My current dumbphone has no numbers or email and it hurts.

My name is Simon and I used to be a blogger.

I’m sure everyone has half-finished projects – and the internet does a great job of reminding me of this. There are long-neglected websites, blogs and journals that come close to haunting me and reminding me of my own inadequacies.

But all is not lost. There’s so much going on to be happy, or even excited about in my life right now. I’ve a lot of other people to thank for it and I can hope that with massive change coming up that they will all be there, continuing to be wonderful.

Nothing is as liberating as quitting your job. I wasn’t unhappy in Nottingham particularly – but the promise and picture I’d created in my head wasn’t delivering. It would have been so easy to concentrate on the positives – like the colleagues and the addictive national stage. Ultimately I had a choice to accept it and play the game better, or do something rash, impulsive, expensive and arguably risky. Not like me at all – but perhaps how I want to be?

Numbers are flashing before my eyes. I blink and I’ve missed another week. Not to mention the digits inexorably decreasing in my bank account. But heh – can’t be buried with it – and it’s not worth a lot sitting in the bank.

One thing I’ve not seen a lot of this year is snow. Normally at this time I’d be full of the joys of winter. Not this year. Whilst all around me are careering down mountains I’ve been working harder than I have in years. I don’t particularly expect or deserve sympathy on this. But believe me when I say I’ve done more work in a single term than I did in the entire three years of my undergraduate. Mind you, that wouldn’t have been difficult.

Essay writing has been interesting. Last night my head was afire with ideas after working all weekend. Of course the coffee may have helped! Maybe I should join the massed ranks of underpaid academics. At least one of my lecturers agrees if an unambiguous question on my interest in a PhD is to be believed. Of course she went quiet when I mentioned funding.

The main thing I am missing at the moment is my camera. They are both hidden away in bags – for fear that the unblinking eye will stare and guilt at me. I’ve not spent the time on it. I’ve not dealt with my backlog. I’ve not updated my website. I spent my last planned weekend away taking photos wrestling with EBSCO and JSTOR. Not quite the same level of photographic indulgence. I have plans of course, though my confidence in my ability to deliver has been slightly dented.

Odyssey looks more likely. Working on it is both a joy and a pain. It is fascinating to be in the company, however virtual, with such a range of people. Sometimes I feel the majority of the weight of the project is on my shoulders. And there’s probably a reason for that. It is a wonderful opportunity though – and I think of the prize.

Change is coming. Flush from the success of the last impulsive decision I risk being in freefall. Sod moving my cheese – it seems to have dropped out of a high-flying aircraft and has reached terminal velocity. It looks like I’ll be in London over the summer. Beyond that? I don’t know. I need a job. I’m hungry for opportunity and that might mean the big smoke. There are a number of seductive elements to the place but Birmingham isn’t without its charms.

Which brings me onto Love. Not a word I know how to use particularly well. But I’m learning. To say I’ve been reminded what it’s about is an understatement – both giving and receiving.

I think that’s enough for now. See you in another year.
Collapse